Testing operational economic and biological impacts of alternatives to clearcutting in a coastal montane forest on Vancouver Island, British Columbia.

MASS is a Research & Operations Partnership:

MASS is part of the national Forest Ecosystem Research Network of Sites (FERNS) which is organized by the Canadian Forest Service.

Montane forests have a winter snowpack and are found between 700 and 1,100 metres in elevation on central Vancouver Island. They contain a large part of the coastal timber harvest (Beese 1995a). Irregular stocking density and growth stagnation in some large montane clearcuts suggest that regeneration may not be meeting current growth expectations. 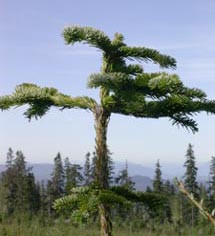 The apparent growth problems may be related to environmental conditions on large clearcuts that create unfavorable microclimate, vegetation competition, nutrition or other ecosystem processes affecting forest regeneration (Koppenaal and Mitchell 1992).

Local and global demand to sustain a multitude of values from forest land, such as visual aesthetics and biological diversity, has raised other concerns with clearcutting. Coastal forest managers need to know where alternatives to clearcutting are feasible, economical and ecologically sound.

The MASS partnership is a multi-agency cooperative testing new approaches to harvesting and regeneration. It builds upon knowledge and expertise gained in over 20 years of silvicultural and ecological research and operations in this forest type (Arnott and Pendl 1994; Arnott et al. 1995).

The overall objectives of the MASS project are to:

There are 21 integrated research studies investigating many aspects of this long-term experiment, including: feasibility and economics, soil disturbance and productivity, decomposition, leaching and nutrition, microclimate, ecophysiology of conifers, natural and planted regeneration, seedling response to competition and nutrition, vegetation succession and forest structure, growth and yield, forest bird and canopy insect diversity, forest health, and the genetic consequences of alternative silvicultural systems.