Reliable spatial data are critical to sustainable development. The Landscape Analysis and Applications section has been involved in the development of Digital Elevation Models (DEM) for Canada and terrain analysis for forest management and forest science applications.

DEMs are regular grid meshes of position (longitude and latitude) and elevation. In an agreement between the Canadian Forest Service (CFS) and the Centre for Topographic Information (CTI) we created a DEM of Canada from the National Topographic 1:250,000 scale database (3 arc second DEM). The DEMs were created by processing digital topographic data through specialized computer software. Our projects involve a partnership with Dr. Michael Hutchinson of the Australian National University, the creator of ANUDEM, the widely acknowledged leading methodology for rapid, high quality DEMs.

An important distinguishing feature of the ANUDEM approach is the fact that it includes the identification and correction of mislabelled contour data and provides a properly flowing connected streamline hydrology.

The purpose of the National DEM projects is to create hydrologically sound, seamless elevation models for Canada. These can be used for landscape management applications in Geographic Information Systems (GIS) and they can provide a basis for a number of spatial and terrain modelling applications.

The 1:250,000 project has been completed and has resulted in sales (via Natural Resources Canada´s Centre for Topographic Information) and applications for federal, provincial and industrial sectors. Resampling the 3 arc second DEMs to coarser resolutions has resulted in other National products appropriate to certain environmental modeling problems (eg. Climate modeling).

There is however a clear need for higher resolution DEMs and undertaking terrain analysis at different scales. The Landscape Analysis and Applications section has begun producing DEMs from the 1:50,000 scale NTS database.

Beyond the development of Digital Elevation Models, we are also undertaking the examination of various terrain attributes for forest research and management applications. 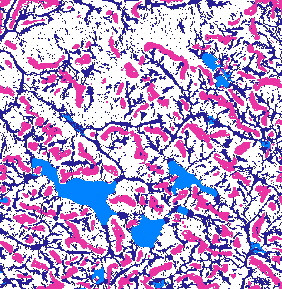 We are also attempting to model topographic position in the form of crests, depressions, slopes and flats and solar radiation as modified by topographic attributes cloud cover and other factors (for example see, McKenney, D.W., Zavitz, B., Mackey, B.G. Calibration and sensitivity analysis of a solar radiation model (SRAD). International J. of Geographical Information Science. Vol. 13 (1): 49-65.

The majority of our terrain analysis efforts are currently focused at the Turkey Lakes Watershed which is a research study area north of Sault Ste. Marie, Ontario.