Mountain pine beetles are a natural disturbance of North American forests, and outbreaks play an important role in directing ecological processes and maintaining the biological diversity of forest ecosystems. However, having infested about over 13 million hectares of lodgepole pine forests in BC to date (BC Ministry of Forests and Range, January 2008) the current beetle outbreak seems to be unprecedented in scale.  As lodgepole pine comprises about one quarter of the provincial timber supply, socioeconomic impacts of this outbreak are enormous. A variety of silvicultural tools and management strategies can be used to reduce the effects of timber losses, the most important tool being salvage logging. In the short-term, adjusting harvest scheduling to remove standing beetle-killed trees can compensate some of the timber losses. However, due to market, operational, legal, and ecological constraints the proportion of the beetle-killed forests that can be salvage-logged is limited. 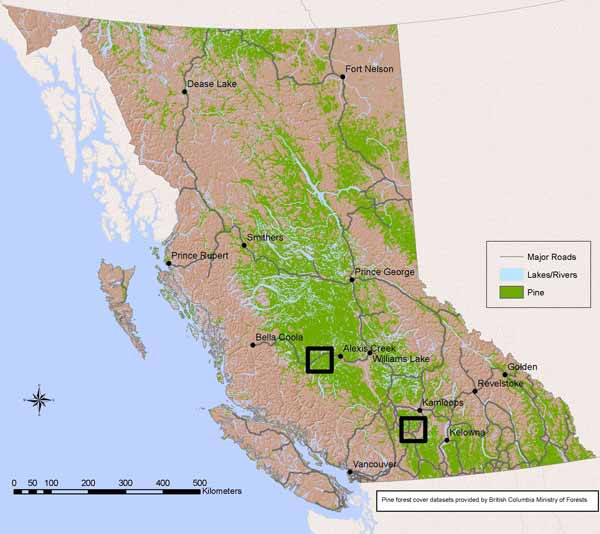 Figure 1. Extent of lodgepole pine and areas sampled in central and southern locations in British Columbia.

Throughout much of British Columbia, lodgepole pine forms even-aged stands initiated by stand-replacing fires. Although such dynamics is considered typical for the species, uneven-aged lodgepole pine stands that have historically been maintained by frequent low-intensity surface fires are common in central BC. Forest landscapes of central BC are dominated by lodgepole pine and can generally be described as a mosaic of even-aged and uneven-aged stands (Agee 1993). However, the disturbance ecology of these forests is changing. The frequency of fires has decreased over the last century, mostly due to effective fire suppression programs. When fire is infrequent, outbreaks of mountain pine beetle are likely to have a greater impact on forest structure, composition and dynamics. However, we know surprisingly little about the changes in forest characteristics following beetle outbreaks. 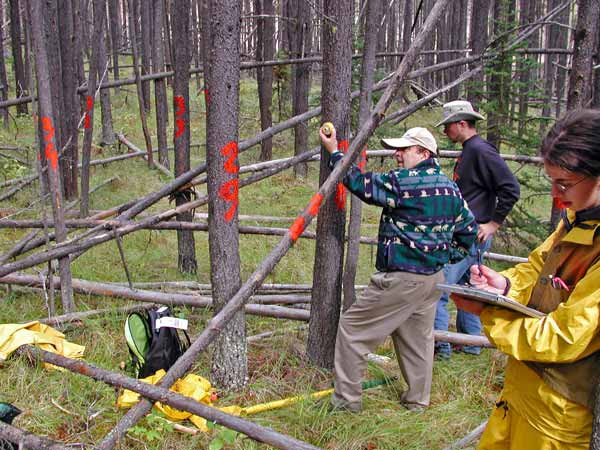 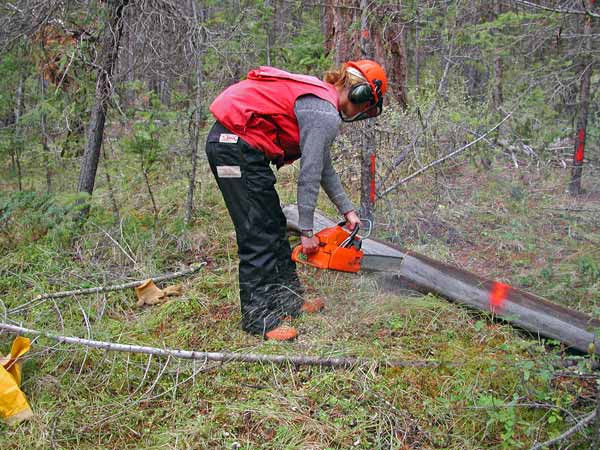 Figure 3. Collecting a disc from dead and downed tree (coarse woody debris) to date year of death and extend stand chronologies back in time, southern BC. 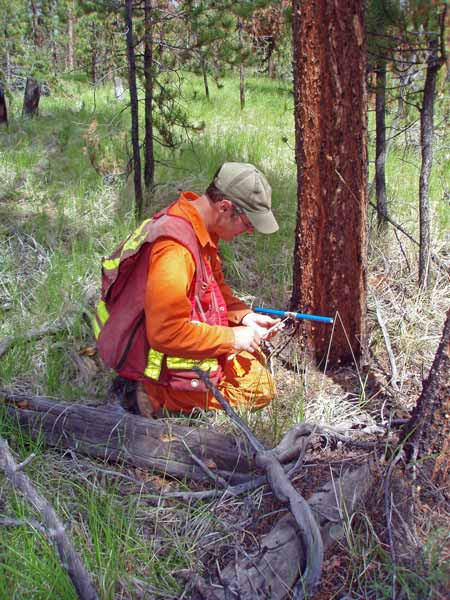 Figure 4. Collecting an increment core from a lodgepole pine in an uneven-aged stand in the Chilcotin Plateau, BC. 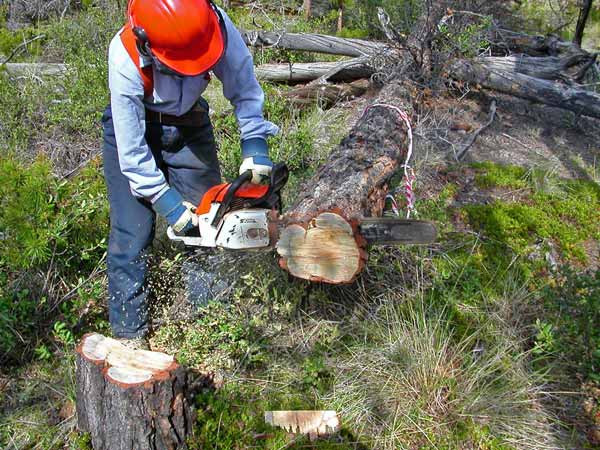 Figure 5. Collecting a disc from a dead lodgepole pine that has multiple scars (both mountain pine beetle and fire scars) from the Chilcotin Plateau, BC.

Some wildfires and mountain pine beetle attacks leave permanent records in the form of scars on the tree bole. After careful dating of the tree-rings we identified the year in which a fire or mountain pine beetle attacks occurred (Figure 6). Based on tree-ring dating we found that in even-aged stands forests were initiated by a stand replacing event (crown fires) in the late 1800s or the early 1900s. In the uneven-aged stands we found that many less severe fires occurred, leaving multiple scars on surviving trees but not necessarily eliminating the entire stand. 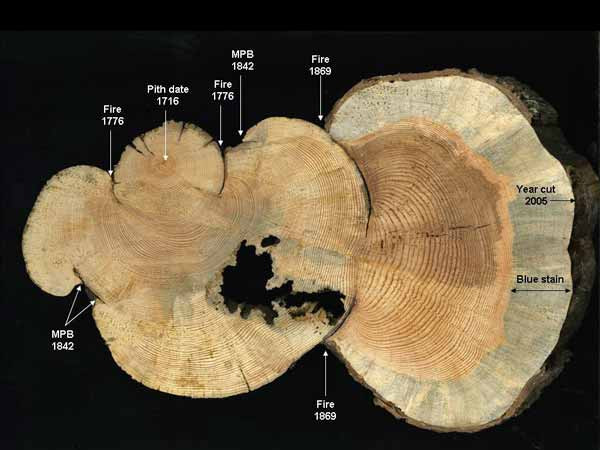 Figure 6. Trees maintain a record of past canopy disturbances in the stand.  This 290 year old lodgepole pine lived through a fire in 1776 and 1869. It was scarred by mountain pine beetle in 1842 and finally succumbed to MPB outbreak and died in 2005.

Mountain pine beetle, under epidemic conditions preferentially kills the largest trees in the stand. Under intense beetle pressure this will result in the mortality of all or almost all of the mature trees within a given stand. The trees that are killed by mountain pine beetle turn red (around 2 years after initial attack), the needles fall off leaving a denuded tree which has a grey appearance (3 to 6 years). Dead trees eventually fall to the ground and become coarse woody debris. The removal of the tree foliage allows much more light to enter lower portions of the canopy, and trees that are not killed by beetle experience an accelerated period of growth (referred to as a growth release) which is enhanced by reduced competition.

We reconstructed past beetle outbreaks by looking for sustained (greater than 5 years) periods of growth release in the tree-ring record. We quantified the growth release using an increased growth factor, for example a 50% increase in mean radial growth, recorded by a percentage of trees sampled in the stand. In both even and uneven-aged stands residual trees experienced a 50% increase in annual growth during the 1930s, 1960s and the 1980s, which all coincide with known periods of beetle outbreak (Forest Insect and Disease Surveys).

Examination of the diameter at breast height (DBH) and height distributions of the sample stands revealed the prevalence of different forest layers, or cohorts, in both the even and uneven aged forests.

In the "even-aged" stands the largest and oldest trees were very large Douglas-fir trees, or veterans, which survived stand replacing fires in the late 1800s and early 1900s. The dominant canopy, which initiated after stand replacing fires, contained the oldest pine in the stand. Below this layer was a lodgepole pine dominated sub-canopy, which was initiated after the 1930s beetle outbreak thinned the dominant canopy. The advanced regeneration dates to the 1980s and was initiated after the 1980s outbreak. Some seedlings were present, initiating around 2004-2005, but there were very infrequent due to very low light conditions at the forest floor (Figure 7).

Figure 7. Schematic diagram of stand structure in "even-aged" stands sampled in the southern-interior, BC.

In the uneven-aged stands there were no Douglas-fir veterans present, and so the oldest trees in the dominant canopy were lodgepole pines. Because of the mixed-severity fire regime of this area, many pine trees survived ground fires and as a result did not establish in one simple pulse (as in the even-aged stand). Also present in the dominant canopy were trembling aspen, which likely established after ground fire events. The next layer was the sub-canopy which contained both pine and aspen which were both largely initiated after beetle outbreaks of the 1930s and 1960s.  Similar to the "even-aged" stands the advanced regeneration layer dates to the 1980s and was initiated after the 1980s outbreak.  Unlike the "even-aged" stands numerous seedlings were present, initiating around 2004-2005, as there was ample light in these stands due to the open canopy with few live mature pine trees (Figure 8).

Figure 8. Schematic diagram of stand structure in uneven-aged stands sampled in the central-interior, BC. 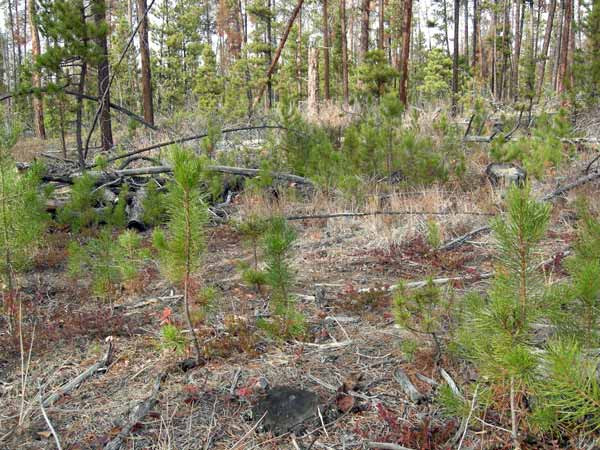 Figure 9. Seedlings established in response to increased light reaching the ground after canopy trees died due to mountain pine beetle attack in the Chilcotin Plateau, BC.

Mountain pine beetle is a natural thinning agent that promotes increased growth among the surviving trees and allows for establishment of seedlings in understory (Figure 9). In all sampled stands the sub-canopy, which consisted of a well developed cohort in both even and uneven-aged stands, was mainly free of mountain pine beetle attack and will endure after the dominant-canopy has been killed and fallen to the ground. The advanced regeneration layer was present and along with the sub-canopy forms an important secondary structure, meaning that the entire forest was not all dead.

Putting it all together

Forest disturbances such as wildfire and mountain pine beetle outbreaks are natural processes that operate on the stand to landscape level. We were able to develop a conceptual model of stand dynamics in lodgepole pine ecosystems in BC (Figure 10). This cycle diagram shows that in the absence of fire mountain pine beetle plays a more important and frequent role in determining forest structure and species composition in both the southern and central interior regions of British Columbia.

Figure 10. Conceptual model of stand dynamics of lodgepole pine ecosystems, showing the cyclical nature of forest disturbances and how disturbance regimes change forest structure in the southern and central interior of BC. (Source: Forest Ecology and Management 257 (2009) 1874-1882).