In coastal British Columbia, mild climates and infrequent disturbance favour the development of long-lived forests with trees of great stature. These forests are admired the world over for the magnificent landscapes and diversity they furnish, and thus changes caused by the conversion of these old-growth temperate forests to managed forests present a sharp focus for public concern.

Several key questions have been raised:

Conversion of old-growth
forests to managed forests on
Vancouver island

On Vancouver Island, harvesting and other disturbances over the last 100 years have created a mosaic of successional stages often alongside unharvested old-growth areas. Such sites provide researchers with a special opportunity to study changes occurring during forest succession and the extent to which old-growth conditions are restored as forests mature.

In 1991, the Forest Ecosystem Dynamics Program initiated research into changes resulting from the conversion of forests in the Coastal Western Hemlock (CWH) zone of southern Vancouver Island. Investigations are being conducted to characterize the soil fauna and flora, small vertebrates and plant diversity, as well as changes in the nature and fluxes of carbon and nutrients in seral stands representing four stages of stand development: regeneration, immature, mature and old growth. A basic suite of four stands -- a chronosequence -- was delineated at each of a number of sites.

In 1992, we established plots on ten sites on Vancouver Island -- five sites in Douglas-fir dominated stands on the dry leeward side of Vancouver Island in the very dry variants of the CWH zone (CWHxm), and five sites in western hemlock dominated stands on the wetter windward side of the island in the very wet variants of the zone (CWHvm).

Each chronosequence lies within an area of five square kilometers or less and contains mid-slope stands of four ages each on similar slope, elevation and aspect.

Although most second-growth stands were of harvest origin and burned, some of the mature stands were of wildfire or landslide origin. In those cases, stands with veterans were excluded.

Although much of the biodiversity and ecosystem process work is focused on three intensive study sites -- Victoria Watershed South, Victoria Watershed North, Koksilah -- all ten chronosequences contain triangular plots established for ecosystem description purposes and for determination of site carbon and nutrient contents. Because of the detailed and repeated sampling to be conducted on the intensive study sites, larger square plots were established.

Chronosequence research offers scientists the opportunity to examine, over a period of a few years, long-term changes in forest succession. The knowledge gained from studies on the special series of sites described above will assist foresters in developing forest practices that safeguard the evolutionary potential of forest land, upon which productivity and biodiversity ultimately depend. 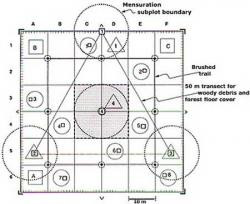