Forest managers and planners who develop pest control policies and research programs require an estimate of the losses attributable to various causes in order to plan for the sustainability of our forests. Forest depletion is the term used to describe the loss of wood from the forest through mortality and loss of growth. Factors causing forest depletion include harvesting, wildfires, and damage from storms, from forest declines and from insects and diseases. This report describes losses over the period 1982-1987, primarily from insects and diseases. Total losses over the period were 102 756 000 million m3 from insects and diseases. The major causes of depletion continue to be the spruce budworm, the mountain pine beetle, root rots, decays and mistletoes. The spruce budworm was the primary cause of losses on conifers; the forest tent caterpillar caused the major losses on hardwoods. Some pests caused significant depletions in particular regions; examples include the hemlock looper in Newfoundland, gypsy moth in Ontario, and the eastern larch beetle in the Maritimes. 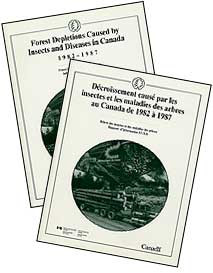