Once transplanting shock was overcome, a positive relationship existed between growth in the nursery and growth in the nursery and growth in the forest environment. The periodic height-growth variation pattern of black spruce, Picea mariana [Mill.] B.S.P., between 10 and 16 years from seed is clinal, although its strength varies from one forest site to another. Sixteen years from seed, height variation attributable to seed origin represents 5 to 17 percent of the total variation, depending upon the site studies. Gains may be expected from the selection of superior provenances and, after selection, these provenances may be relocated. However, due to provenance x environment interaction, selection for the entire area to be reforested cannot be based solely on those provenances having shown the best mean potential on the test sites as a whole. Although it is possible to identify relatively stable provenances, we have proposed subdividing the area into smaller breeding zones. Five zones were delineated based on provenance test results and on existing ecological regions. In addition, 5 superior provenance regions were identified. Finally, more than 20 provenances were proposed for individual breeding zones with at least one provenance test repetition. These would result in gains of 12 to 14 percent in mean provenance height.

These conclusions were drawn from the analysis of phenotypic observation surveys conducted in 1985 in four repetitions of a range-wide black spruce test in Quebec. 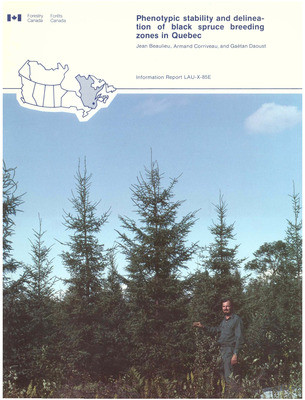