This report describes the directives for using PSP, an interactive computer program that is very useful for creating and updating the data files of permanent sample plots in research plantations. Each plot may contain up to 186 seedlings, while the number of variables per seedling can attain 56. The program was developed to be used in conjunction with an IBM PC® or any other compatible system, but most particularly with the Microflex® PC-IOOO, a DAP hand-held computer which has a window display of 16 lines by 21 characters. A feature of this program is the permanent display of the sampIe plot, where each seedling is illustrated by a condition symbol. During data gathering, a cursor positions itself automatically over the seedling where the measurements are being taken. Data are recorded rapidly and the transfer to a computer permits immediate analysis by statistical packages such as SAS. This system replaces the old pencil and paper method of data collection and eliminates the risk of error in the transfer of data.

The trademarks are given as information only. Their use does not imply any recommendation whatsoever on the author's part or that of Forestry Canada. 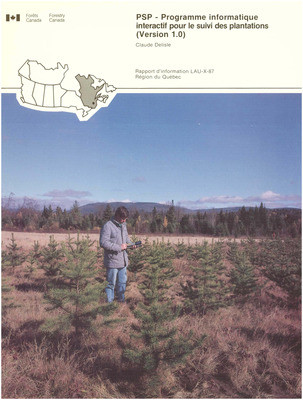