The phenology of Winthemia fumiferanue Toth. (Diptera: Tachinidae), a larval -pupal parasitoid of the spruce budwom, was studied in Quebec to evaluate its synchrony with the host. Adult emergence showed protandry and occurred when budworm larvae were in the second to the fifth instar. In Malaise trap catches, males were dominant during the emergence period but as this ended, females became dominant and remained so for the rest of the season. Females emerged with undeveloped ovaries and abundant fat reserves. The maturation of eggs was completed within 2 weeks after emergence and coincided with the appearance of sixth-instar budwom larvae. Potential fecundity was correlated with female body size. Females deposited, on average, 32% of potential eggs, many oocytes remaining undeveloped in the ovarioles. Oviposition on spruce budwom larvae was synchronized with peak abundance of the sixth instar. Winthemia fumiferanae prepupae, among other dipteran parasitoids of the spruce budwom, were the last to drop to the ground. There was evidence of a partial second generation but its incidence was below 1 % under field conditions. More than 95 % of the W. fumiferanae puparia were found between 0 and 40 mm below the soil surface. The importance of W. fumiferanae in spruce budwom outbreaks and factors that may reduce its efficacy as a mortality agent are discussed. 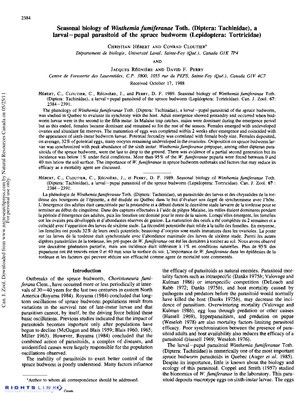