Since about 1960, sugar maple decline has occurred in the Northeastern States and Eastern Canada at times extending over large areas. A major center of decline occurs in Quebec Province. In 1987, aerial survey estimates indicated 16 000 acres with severe decline, 133 000 acres with moderate, and over 2.5 million acres with light decline. In this and in neighboring provinces and states, suspected causes are insect defoliation, management practices, climatic disturbances, or a combination of these. However, in Quebec as decline occurs over a very large area, a response to an overlying stress factor is suspected. Recent climatic extremes may be a primary cause but acid precipitations are also blamed. The Quebec situation may be unique as it is located in a area of the continent where relatively high levels of acid precipitations fall on soils classified as having a high acid sensitivity potential. Foliar analyses of declining trees suggest an acid rain effect. 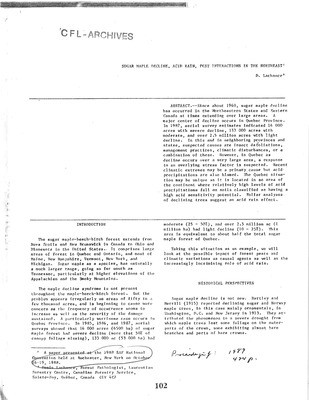