The braconid parasitoid Meteorus trachynotus Vier. was found in overwintered larvae of the obliquebanded leafroller, Choristoneura rosaceam (Harr.), on foliage of a variety of deciduous species, well before the parasitoid's attack on the spruce budworm. Choristoneura fumiferana (Clem.). In the spring, percentage parasitism of C. rosaceana by M. trachynotus was 8.0 and 18.8% in 1986 and l987, respectively Maximum parasitism on C. fumiferana (35 and 4% in 1986 and 1987, respectively) was reached in late June, at a time when over 50% of M. trachynotus cocoons found on deciduous vegetation had emerged. Twenty days later, parasitoid's produced on C. fumiferana reached 50% adult emergence. The catches of adult parasitoids on sticky traps placed on deciduous trees and on conifers showed two periods of adult activity. Based on the sex ratio of captured parasitoids, male M. trachynotus were active at emergence sites, whereas females were found mostly in the habitats of available hosts. The phenology of C. rosaceana was observed in 1987. As indicated by light-trap captures, males fly sooner than females. Eggs were laid in July, and so the eqly larval stages were available to female M. trachynotus as overwintering hosts. Several parasitoids common to C. rosaceana and C. fumiferana were identified. 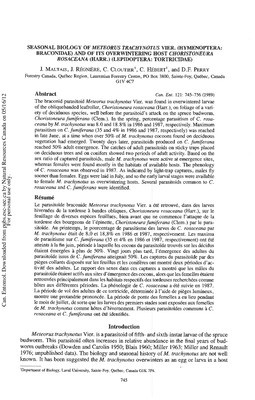