The 45-cm mid-crown branch tip from balsam fir and white spruce is described in terms of surface area, fresh weight, and bud density. Fresh weight is suggested as the most appropriate unit to express density of all stages of the spruce budworm’s, Choristoneura fumiferana (Clem.), life cycle, particularly for the purposes of comparisons between host species and locations with different foliage conditions.

Changes in distribution of the spruce budworm in the crown of balsam fir are documented for all stages of the insect’s life cycle. Correction factors to account for these changes when estimating density on the basis of the 45-cm branch tip sampling unit are given for balsam fir and white spruce.

The amount of error in detection of spruce budworm larvae on foliage of both host trees by sampling personnel varied systematically and consistently as a function of insect development. A method to compensate for this type of error is also suggested. 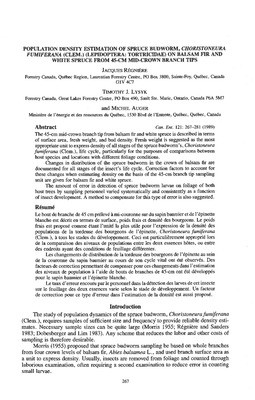