A process-oriented model of feeding by the spruce budworm. Choristoneura fumiferana (Clem.), was developed to simulate the seasonal patterns of defoliation on growing shoots of balsam fir, Abies balsamea (L.) Mill., and white spruce, Picea glauca (Moench.) Voss. The model simulates larval and shoot growth, seasonal dynamics and feeding by a spruce budworm population based on the density of overwintering spruce budworm and shoots, budworm stage-specific survival rates and input daily minimum and maximum air temperature. The model, which was validated with extensive field data, can be used to determine the effect on defoliation of specific mortality rates inflicted on spruce budworm at any point during larval development. Analysis of model behaviour revealed that weather had little influence on the final degree of defoliation. The model also provides a simple explanation for the observation that white spruce is generally less defoliated than balsam fir. It emphasizes the need to consider foliage abundance in terms of number and potential size of shoots, as well as larval survival rates and the timing of mortality to predict defoliation more accurately from estimates of spruce budworm population density. 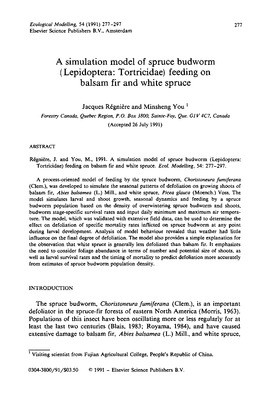