The concentrations and fluxes of the major ions were examined for a boreal balsam fir forest located at the Lake Laflamme catchment, Montmorency Forest, 80 km N of Quebec City. The pH of the throughfall (TF) and the incident bulk precipitation (INCB) were equal (4.40) and higher than in the stemflow (SF) (4.18). Below the roots soil solution (BR) and output stream (OS) were less acid with respective pHs of 4.85 and 6.52. With the exception of NH4 and NO3, the throughfall and stemflow were more concentrated than the INCB. The enrichment factors for K, Mg, Mn, and Ca were 12, 4, 4, and 3 for the throughfall and 83, 14, 21, and 11 for the stemflow. Based on the weighted mean concentrations of seven years for a vegetation period of 5 months, we have estimated that the catchment has accumulated 0.22 kg/ha of H and 4.4 kg/ha of NO3 and has lost respectively 5.1, 2.0, 1.6, 1.3, and 0.04 kg/ha of Ca, SO4 Na, Mg, CI, and K. The overall canopy process was neutral salt leaching of cations. The use of a lime potential calculation supported the identification of a Ca+Mg front that moves through the forest canopy. Actual proton production in the forest system indicated that soil acidification had several causes.

Also available under the title:
Transfers of soluble inorganic elements in a boreal fir forest (English) 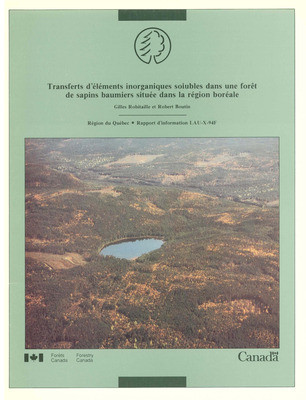