The immature stages of Meteorus trachynotus Vier., developing in larvae of Choristoneura fumiferana (Clem.), are described. The egg of M. trachynotus is of the stalked type. There are three larval stages. The first instar has a caudal appendage which stops growing in the second instar and is lost when the larva exits from the host in the third instar. Only the first and third instars have sclerotized structures. The head region of the first instar bears a pair of hooklike appendages which are described for the first time. Cephalic sclerites of the last instar larva of other species of Meteorus are compared with those of M. trachynotus. The average duration of immature development at 23°C was 18 days, the egg stage lasted 3 days, the first, second, and third instars lasted 5, 2.5, and 2.5 days, respectively, and the pupal stage lasted 5 days. 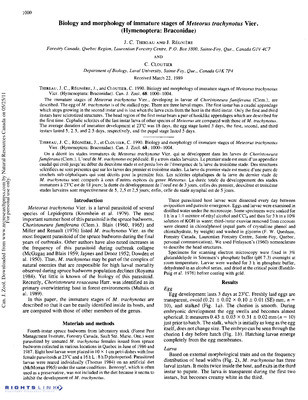