A method was developed to determine the growth losses in volume in surviving balsam fir following a spruce budworm outbreak that occurred in the Ottawa River Valley in Quebec. Equations expressing the diameter growth rate had there been no infestation were developed. These equations were applied to balsam fir surviving the epidemic so as to determine what their diameters would have been without defoliation. Subsequently, the theoretical volumes were assessed using these diameters. The method was validated for the pre-epidemic period and precision was superior to 90%. Analyses revealed the outbreak caused a 49% volume growth loss to balsam fir for a period of approximately 10 years. 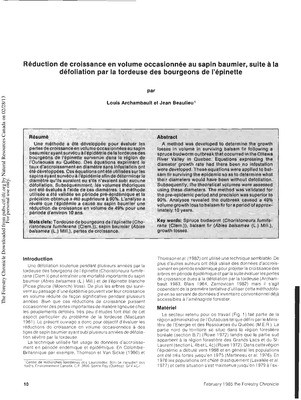