The yield of balsam fir stands is examined from results of 52 forest stands in the Joffre Lake area in Quebec's Gaspé region. Site quality was based on site index (i.e. average height at 50 years) and some stand characteristics. Site index curves were established on the basis of Korf's growth function, from stem analysis of 97 dominant balsam fir [Abies balsamea (L.) Mill.] trees. Even though at 50 years the height-growth range represents a sufficiently large variation reflecting the possibility of several site classes, the comparison of height growth and wood density in different plant groups do not confirm these results. Moreover, the ordination of fully stocked stands according to mean dbh indicate that yield level was the same for the group of sites studied and that site indices reflect nothing more than variations in height growth, which may be explained by the effects of repeated spruce budworm outbreaks. 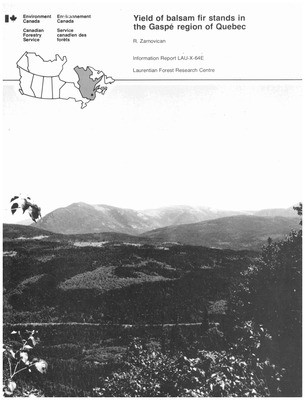