An 85% reduction in larval population of the eastern hemlock looper (Lambdina fiscellaria fiscellaria (Guen.)) was achieved over 80% of the area treated with fenitrothion in 1972 on Anticosti Island. No defoliation occurred on 90% of the treated area with light to severe defoliation on the remaining 10%. The 1973 spray program covering 16 900 ha resulted in high larval mortality in the area treated once (96.6%) or twice (97.5%). Seventy five per cent of the sprayed area was not defoliated and 1 023 ha suffered light to moderate defoliation. The combined action of aerial spraying and of an Entomophthora fungi were responsible for bringing the eastern hemlock looper outbreak on Anticosti Island to an end.

Aerial and ground surveys on Anticosti Island in 1971 showed that defoliation by the eastern hemlock looper had occurred on 226 629 ha and tree mortality on 84 986 ha in mature balsam fir stands. An outbreak of this pest also occurred on 71 226 ha on the Lower North Shore of the Gulf of St. Lawrence near Havre-Saint-Pierre and in the Aguanus and Natashquan rive watersheds. The Québec Department of Energy and Resources and the Consolidated-Bathurst Company agreed to spray to protect balsam-fir stands from further damage on Anticosti Island and the North Shore. The Laurentian Forest Research Centre measured hemlock looper populations levels prior to spraying, determined timing of spray and assessed results. About 214 488 ha on Anticosti Island and 71 226 on the North Shore were to be sprayed. Two applications of fenitrothion (with intervals of 4 to 8 days) at the rate of 1 461 L/ha (140 6 g/ha of active ingredient) were recommended. The spray operation on Anticosti Island was carried out in 1972 between July 3 and 12 using 15 TBM Avenger aircrafts. The same insecticide and dosage rate were recommended for the 1973 spraying program of 16 900 ha; only 4 180 ha were treated using a CL-215 aircraft. The 1972 spray program on the North Shore was cancelled following collapse of the infestation.

Notes on the life history and sampling methods to monitor hemlock looper egg, larval and moth populations are presented. 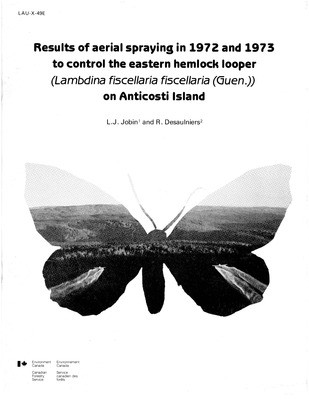