During a survey of 1,183 pine plantations in southwestern Quebec, scleroderris canker was found in 163 plantations, mainly on red and occasionally on Scots pine. The European race of Gremmeniella abietina was identified in 74% of the diseased plantations, the North American race in 18%, leaving 8% where tests were inconclusive or the isolates contaminated. This is the second large outbreak of the European race of this disease in North America after the one reported in New York State in the late 1970s. Plantations varied in age from 6 to 24 years and half of those diseased were severely damaged. Both races were well mixed geographically and no definite source of infection or cause for this outbreak could be identified. 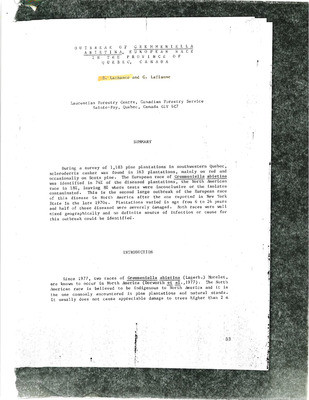