Twenty-four samples of several organic surface horizons (L, F1, F2) and one mineral surface horizon (A1) of soil were taken from each of 70 study units set up in two maple stands in the Duchesnay Station. Yellow birch was present in one stand and yellow birch and beech in the other. Soil samples were analyzed to determine the pH and other properties before and 1, 5, and 10 years after various treatments. Following the addition of 55 and 110 kg/ha nitrogen in the form of urea, the pH rose above control values in 1974, dropped to control values in 1975 and 1979, and dropped again by 0.2 unit in 1984. After 20 and 40 percent of the merchantable volume were harvested, the pH was the same as in control units in 1974, 1975, and 1979 but became higher by 0.2 unit in 1984. No changes in pH were observed following the annual tapping of trees. In untreated sites, the pH rose substantially and significantly, i.e., by 0.5 and 0.3 unit, in the two different types of maple stands. Different variations in the weight, C/N ratio, levels of ammonium, nitrate, organic matter and total nitrogen and in water content were also recorded in treated and untreated units in 1974, 1975, 1979, and 1984. 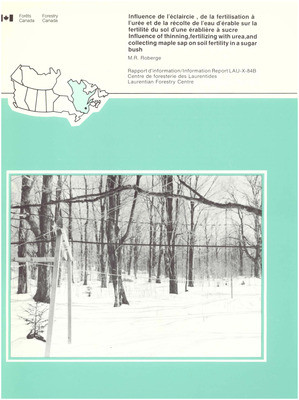