The impact of logging on water quality is compared between two Quebec sites; one on the Côte-Nord and the other in Haute-Mauricie. Comparative measurements were made at each site in natural conditions, in a stream protected by a green strip and in a watercourse perturbed by logging operations. In Haute-Mauricie, logging with preservation of a green strip increases the color by 65 APHA units while the other parameters are not modified. At the Côte-Nord site, the color and the concentration of calcium and potassium are respectively increased by 88 APHA units, 0,9 and 0,7 ppm. Except for pH at both sites and the dissolved oxygen concentration in the Côte-Nord area, all the parameters studied were affected by logging without protective measures. The dissolved oxygen concentration decreased by 6 ppm in Haute-Mauricie. At the Côte-Nord and Haute-Mauricie sites, the augmentations observed were respectively 10 and 13 ppm for the concentration of suspended sediments, 2 and 3,2 °C for water temperature, 1,2 and 3 ppm for potassium, 4,4 and 2 ppm for iron, 531 and 497 APHA units for color and finally 12 and 18 µmhos/cm for the conductivity. The different responses to the treatments between the two sites are not completely explained by this study. 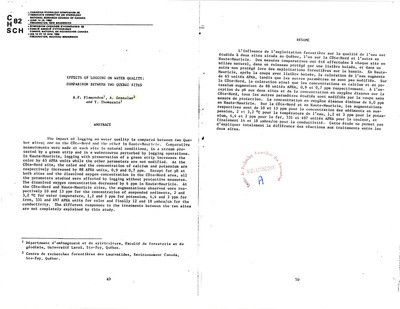