Of 68 hybrid poplar clones obtained from the Northeastern Experimental Station (U.S.A.) and planted on 53 sites throughout Quebec, 15 clones growing on 12 sites were used in this study. After ten years of growth, eight hybrid poplar clones were chosen for further studies.

Three classes of total performance were established by the selection of hybrid poplars sites. The best and average sites were represented by bottom lands and uplands respectively. They produced an average height of 13 and 10 m on sod soils. Poor sites produced a mean height of 4.5 m on sod soils. Soil moisture appears to be the main reason for various performances and growth rates of hybrid poplars on these three sites. Site preparation and cultivation for three years subsequent to planting increased not only height growth but also the survival of hybrid poplars.

The most promising, clone NE-56, produced a mean height of 12.6 and 9.9 m on good and average sites, had an excellent survival rate, and formed very good stems.

Also available under the title:
Performance of hybrid poplars in Quebec : ten years after planting (English) 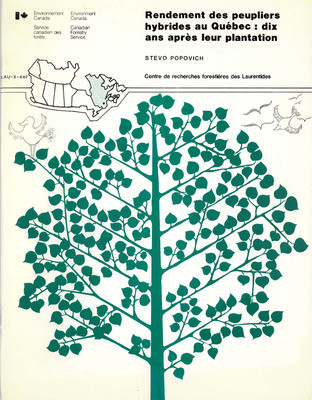