The influence of parasitism by Apanteles fumiferanae Vier. (Hymenoptera: Braconidae) on spring dispersal and changes in the distribution of larvae of the spruce budworm (Lepidoptera: Tortricidae). 1987. Nealis, V.G.; Régnière, J. The Canadian Entomologist 119: 141-146.

Most emerging 2nd-instar larvae of spruce budworm, Choristoneura fumiferana (Clem.), tested in the laboratory were photopositive and there was no difference in response between healthy larvae and larvae parasitized by Apanteles fumiferanae Vier. However, in the field, parasitized individuals were under-represented among larvae dispersing on silk threads between tree crowns. There is evidence that this was due to the relatively late emergence of parasitized larvae. These parasitized larvae therefore encountered fewer crawling larvae at the tips of branches, and consequently their propensity for dispersing was reduce. 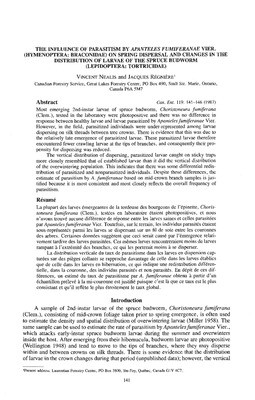