Large, recently burned areas, where regeneration is inadequate or practically non-existent, occur in Quebec. Although much of the non-reproducing areas are a poor prospect for reforestation, there are extensive areas of accessible and potentially productive forest land which might seriously be considered for reforestation if suitable methods were available (MacArthur, 1960).

As no definite corrective measures have been developed for this situation, research has been initiated to provide specific recommendations for the reforestation of particularly valuable sites. Considering the large areas involved and the time and money which would be required to plant them, broadcast or aerial seedling, if feasible, would be a more attractive alternative. The purpose of this project, initiated by Mr. A. Demers, is to investigate techniques for broadcast seeding jack pine and scots pine under specific conditions. 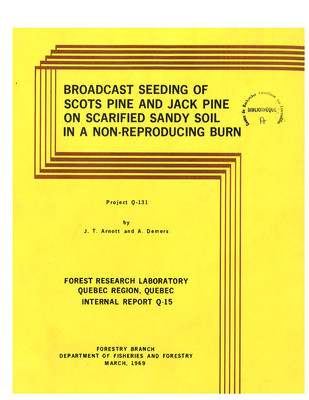