Laflamme Gulf marine shells in postglacial deposits are reported probably for the first time in the northern part of the Lac-Saint-Jean Area. Macoma balthica, Hiatella arctica, Balanus sp. and (?) Nuculana sp. were observed in five localities north of Val Jalbert and as far as Dolbeau; seven non marine species were also observed at Pointe-Bleue.

The minimum value for the level of the postglacial submergence in this area is 180 m. Balanus sp. is here reported for the first time in this area; so are probably the non marine species collected at Pointe-Bleue. 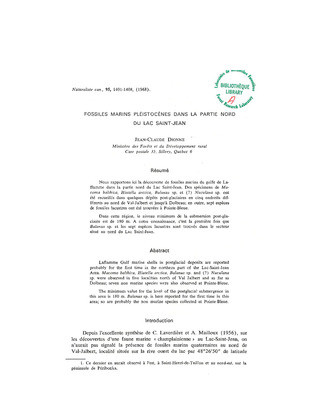