A 35-year comparison (1923-58) of the results of clear and partial cutting in a mixedwood forest in Forest Section L.7, Quebec, indicates that growth of pulpwood-size spruce and fir was greater on the clear-cut area. However, mortality from a spruce budworm outbreak, which began in 1947, had by 1958 resulted in a large reduction of commercial volumes through the whole forest and thus the greater growth on the clear-cut area was lost. The two cuts in the partial-cut forest yielded more pulpwood per acre than the initial clear cutting. This greater production represents an inherent advantage of cyclical partial cutting in forests susceptible to severe attack by the budworm. 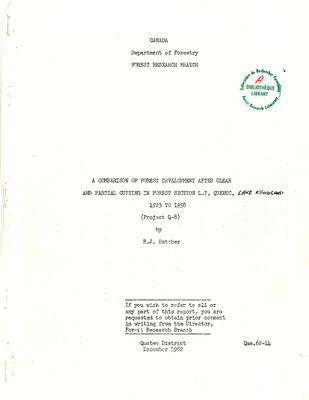