Forest entomologists seem to agree that during an outbreak of the spruce budworm, in general a greater defoliation and fir mortality occur in mature and overmature stands than in immature and young stands. While the literature provides irrefutable evidence that mature and overmature fir forests are more susceptible to budworm outbreaks, the fact remains that a greater vulnerability of mature stands to damage remains to be verified by field study over an extensive area.

Thus the severe damage discovered in 1961 throughout a 3-square-mile young fir forest on the Vermillion River was of considerable interest, and resulted in the decision to remeasure a second area of immature fir that had been damaged by the budworm, and whose scheduled 1959 remeasurement had been deferred because of the insect attack.

The following pages report on the state of a 350-acre dominantly balsam fir forest in 1949 and 1963, and provides an idea of the damage caused by a spruce budworm outbreak which may have begun as early as 1946 and which had caused light to moderate defoliation by 1949. 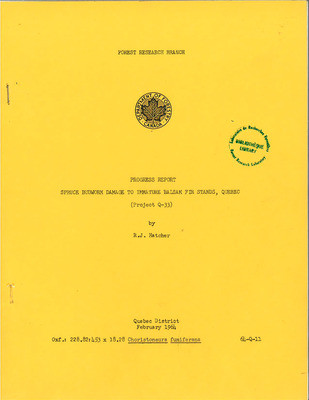