Artificial inoculations were made on 11 species of conifers in a plantation at Victoria, using four dwarf mistletoe species native to British Columbia, and on two species of conifers, using one dwarf mistletoe species native to Washington. An assessment of the degree of compatibility between host and parasite was made by comparing dwarf mistletoe seed retention and germination, infection percentages, endophytic growth rates and aerial shoot production on the same host species. Resistance mechanisms were shown to operate at various stages and levels in the life cycle of the parasite, ranging from a reduction of seed germination of some dwarf mistletoes on certain hosts to apparent immunity. Arceuthobium douglasii was the most host specific, followed in order by A. americanum, A. laricis and A. tsugense. The latter was able to infect species of six genera of conifers. The results pointed to two physiologically differing populations of A. tsugense, one on western hemlock (Tsuga heterophylla) and the other on shore pine (Pinus contorta var. contorta). 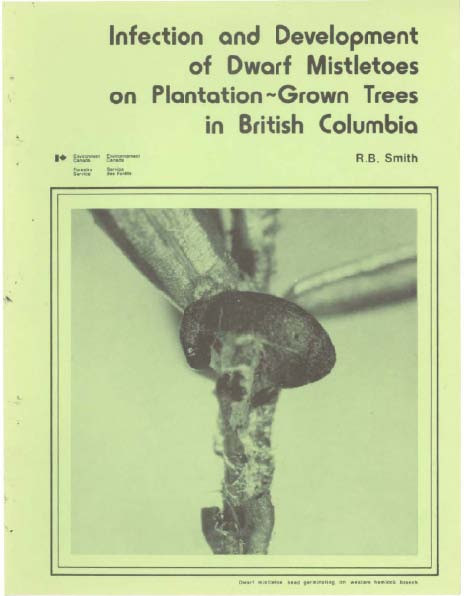