The Multi-Pher® insect trap was first manufactured and marketed in 1984. The following year, the Multi-Pher® trap was used in the development of a detection and monitoring system for spruce budworm (SBW) (Choristoneura fumiferana Clem.) over a major part of the distribution area of this species in North America. Between 1984 and 1989, twelve experiments to assess and optimize trap effectiveness were conducted in balsam fir (Abies balsamea [L.] Mill.) stands infested by spruce budworm in the Gaspé Peninsula. The number of male SBW moths captured was considered an adequate measure of trap effectiveness. Three models of the Multi-Pher® trap were compared. Several elements of the trap were tested: the lure brand and holder, insecticide, funnel, baffle, color and trap placement, its cleanliness and holder. The Multi-Pher®-l model proved to be the most effective. White Multi-Pher®-l traps placed high in the crown of balsam fir trees and fitted with a funnel, baffle, Biolure® bait, and 1/8 of a Vapona™ strip were more effective than their respective controls placed about 1.5 m from the ground. Neither lure holder nor insecticide dose seemed to affect the number of males captured. In one experiment designed to verify the effectiveness of the insecticide, the average number of males was four times higher in the insecticide-lined traps than in the control traps, but this difference is not significant because the experiment was conducted at only two sites and the difference between average catches in the insecticide-lined and control traps was not stable. Vaportape II™ was less effective than 1/8 of a Vapona™ strip. The average number of males in traps hanging from 45-cm wooden sticks nailed to tree trunks was comparable to the number captured in the controls hanging from dry branches, but was lower when the rod was 70 cm rather than 45 cm long. Appendix 1 lists Lepidoptera species other than the SBW caught in the Multi-Pher® traps from the Quebec SBW monitoring system.

Also available under the title:
Use of the Multi-Pher® trap to monitor spruce budworm populations (English) 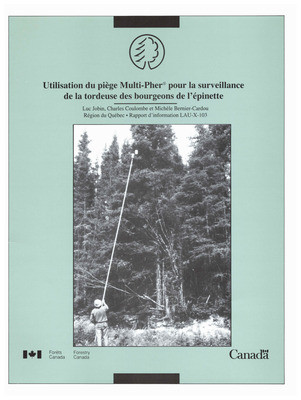