Pulicalvaria (Recurvaria) piceaella (Kft.) is a needle-miner of spruce indigenous to North America. Its first occurrence on the continent of Europe near Pfungstadt (Hesse) has recently been reported (Führer, E. 1963. Anzeiger für schädling-skunde 36: 93-4), and its further spread in Germany is considered highly probable.

The following is a list of 30 species of parasites recovered from P. piceaella during studies carried out between 1956 and 1959 at various localities in the Province of Quebec. It has been prepared in anticipation of the interest that may be expressed by workers in Germany. The list is subdivided according to host stage attacked and the habits of the parasite. 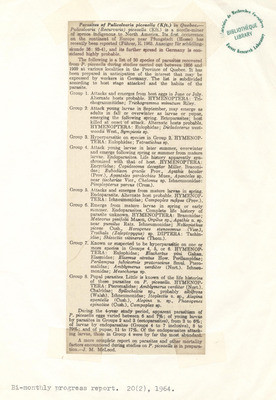