During the year 1953, the Forest Insect Survey was conducted by the personnel of the Provincial Bureau of Forest Entomology in co-operation with the staff of the Forest Biology Laboratory. Progress was made towards the achievement of a more accurate assessment of forest insect conditions in Quebec, by the addition of two seasonal men to the regular staff of seven insect rangers. Moreover, an aerial reconnaissance of budworm infested areas totalling 55 flying hours, was conducted in Gaspe Peninsula and St. Maurice watershed. Intensification of efforts both on the part of the rangers as well as personnel of co-operative agencies contributed to bring the number of collections from 4,062 recorded in 1952, up to 5,799 in 1953. The following is an account of the number of collections received from the different sources : companies and forest protective associations 2,756 (47.5 per cent); forest insect rangers, Bureau of Entomology 2,018 (34.8 per cent); fire rangers and inspectors of Protection Service, Department of Lands and Forests 918 (15.8 per cent); others 107 (1.9 per cent). 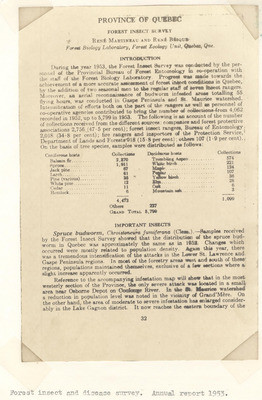