The special survey on the Jack Pine sawfly in Quebec, initiated in the spring of 1954, was continued in 1955. The same territory was surveyed in both years; it included the St. Maurice watershed and the territories south and west of this watershed.

In 1955 the field work was again carried out with the active co-operation of the personnel of limit holders who were already well acquainted with the sampling procedure. Written instructions were distributed in early spring to all cooperators and the material necessary for making collections was furnished upon request.

In addition to the ground survey, an aerial reconnaissance was conducted over the same territory in late summer, with the main purpose of obtaining more complete information on the location and status of sawfly infestations, as well as the distribution of Jack pine stands.

This year also some intensive studies were initiated on the biology, ecology and natural factors of control of Jack pine sawflies, at a temporary field station established at Clova. Observations made during this first year of work will be the subject of a special report and the purpose of the present one is to summarize the observations made in connection with the ground and aerial surveys. 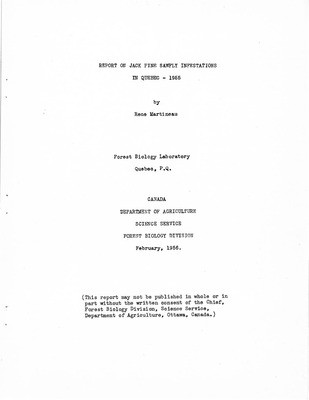