The Forest Insect Survey in Quebec followed the same procedures that have been in effect in recent years; it restricted its activities to specific problems in particular areas. Aerial and ground surveys were made of the spruce budworm infestation in the Gaspe region and investigations of jack-pine sawflies were continued and extended to include the Manicouagan and Lower St. Lawrence regions. Information on the distribution and abundance of the European spruce sawfly, European pine shoot moth, larch sawfly, and eastern hemlock looper was obtained during special studies of these forest insects. 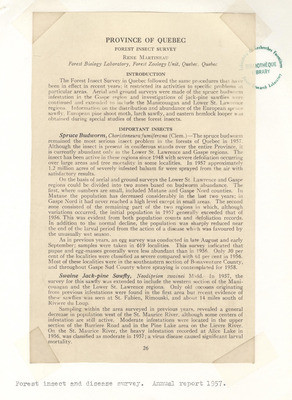