No changes were made in the general arrangements which have prevailed since 1955 for the Forest Insect Survey in Quebec, and again in 1958 the Survey was limited to problems of particular interest. The spruce budworm and the Swaine jack-pine sawfly were again the two insects of major importance while the larch sawfly attracted more attention than in former years. Ground surveys of the spruce budworm were conducted with the same intensity as in previous years in the Lower St. Lawrence and Gaspé regions. The aerial survey was reduced to 17 hours of flying compared with 71 in 1957, because of the more uniform conditions brought about by the marked reductions in population level. In previous years a general survey was made of all jack pine areas, but in 1957 the survey for jack pine sawflies was restricted to Settrington Township, Charlevoix County. The other information presented in this Report was obtained from observations connected with the various projects of the Laboratory. Several insect species were recorded this year by the Forest Insect Survey in Quebec for the first time. 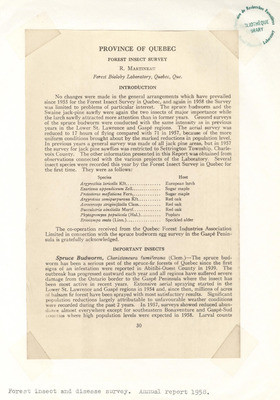