Ratios of h/I and height-growth patterns of planted red pine in the Great-Lakes St-Lawrence Forest Region in Quebec were investigated. The h/I ratios varied between 0.92 - 1.28, 0.94 - 1.25 and 1.20 - 1.56 respectively south of St-Lawrence River, in Portneuf County and at Valcartier station. Generally, the h/I ratios increased significantly as a result of poor drainage conditions in the first area and as a result of potassium and or magnesium deficiencies north of St-Lawrence River. High h/I ratios resulted from drought and vegetation competition in the juvenile stage for stands on good sites at Valcartier.

In general, height-growth patterns of red pine were rectilinear on good sites and curvilinear on poor and medium sites, except for Valcartier station where for all site classes, polymorphic curves were parabolic. Therefore, no single set of site-index curves is applicable for all three areas. To obtain an accurate estimate of the site-index, stands must be at least 10 and 15 years old at breast height respectively in the southern and in the northern part of St-Lawrence plain. Marked variations in h/I ratios and height growth patterns were observed within the Morin soil series on marine sediments and St-Colomban land type on till. Thus current soil classification requires further refinement for a useful site classification for red pine in Quebec. 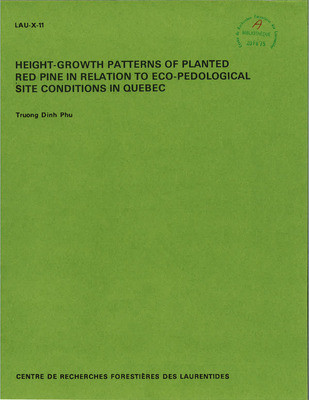