From 1981 to 1984, nineteen experimental plantations were established on a range of eight typical reforested sectors in seven regions of Quebec. Included in the experiments, which took place during two planting seasons, were one or more of the following species: black spruce, white spruce, jack pine and Scots pine. As weIl, at least two of the following containers were used: Quebec Tube, Styroblock 2a, Styroblock 4, Styroblock 8, Can-Am 2, and Paperpot 508. This report presents the results of the plant height growth for the first five years in the field, and the rate and probable causes of mortality in the field after the first, third and fifth year following plantation. Analyses of variance were done on the fifth year data and several trends were evident in most of the experiments, namely: spring-planted seedlings had higher survival rates; spring-planted and fall-planted seedlings frequently demonstrated equivalent height growth performance; survival and height growth performance are not affected significantly in more than 75% of cases by container type. Pine had higher survival rates and growth rates than spruce. Competing vegetation and animal depredation were the two main causes of mortality in spring and fall plantations, while early frosts mainly affected faIl-planted black spruce. 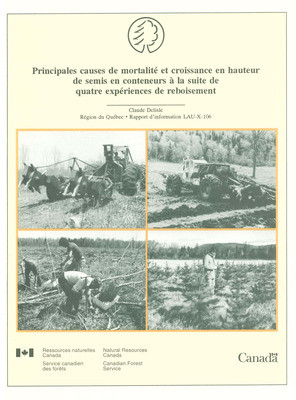