This report presents the assessment of the effect of drainage on the growth of black spruce (Picea mariana [Mill.] B.S.P.) and tamarack (Larix laricina [Du Roi] K. Koch) in the spruce-mosses and spruce-litter forests located at Saint-Anaclet, near Rimouski, Quebec.

In the absence of control plots, the effect of drainage was assessed from time data using the analysis of variance with repeated measurements. The time data correspond to the means of the increments (radial, apical and volume) and to the means of the form factors before and after drainage, which are determined using stem analysis. The study also includes the assessment of the ligneous production of the experimental plots, which was done by comparing inventories after 5 years.

Analysis of variance does not make it possible to assign to the drainage operations any positive and statistically significant effects on the growth of the 2 species in the 2 forest types under study. In fact, the results show non-significant or negative effects for the different increments of the spruce-litter forest. In the spruce-mosses forest, it is found that after drainage, there is a statistically significant increase in radial and apical growths in all growth classes, whereas the effect of drainage on volume increment is non-significant. 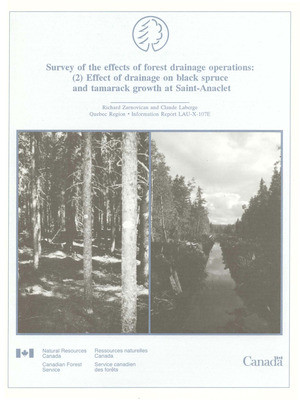