Tranosema rostrale rostrale (Brishke) (subfamily Campopleginae) is a parasitoid of the eastern spruce budworm, Choristoneura fumiferana (Clemens), in Canada and the United States. T.r. rostrale has often been confused with the closely related Enytus montanus (Ashmead), another parasitoid of C. fumiferana. These 2 species are defined and characters distinguishing them are compared and illustrated. A survey across southern Quebec indicates that >99% of all T.r. rostrale/E. montanus-like parasitoids recovered from spruce budworm larvae implanted in fir stands over a period of 1 wk belong to the former species. T.r. rostrale oviposits in all postdiapause instars of C. fumiferana, as well as in several alternative hosts, starting in late May in the Quebec City region. At 20°C, development inside the host takes ≈14 d and the parasitoid goes through 3 stadia. T.r. rostrale is believed to complete 2 or 3 additional generations on alternate hosts. 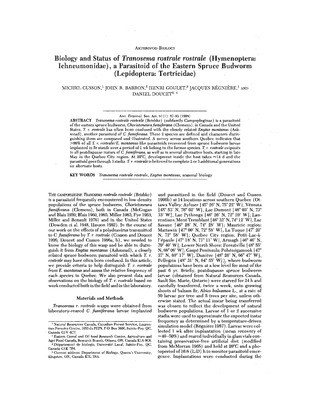