This study was conducted as part of the genetic research program on Norway spruce [Picea abies (L.) Karst.] grown in Quebec. The objective of the study was to acquire more information on the wood density of Norway spruce grown in plantations and to determine whether the wood density could be used as a selection criterion for species improvement. To this end, 70-year-old commercial plantation-grown trees were first sampled in order to establish the wood density radial variation pattern and determine the existing relationships between the properties of juvenile wood and the average values of mature trees. Subsequently, the study of 22 provenances from central Europe introduced in Quebec was designed to verify the intra- and inter-provenance variation in wood density, determine the correlation between wood density and radial growth rates and origin, and estimate the impact of a selection of superior phenotypes on wood density. The study on 70-year-old trees showed that wood density declines from pith toward bark up to the eighth annual ring, stabilizes until the fourteenth annual ring, and increases thereafter. The simple regression equations calculated between the density of the juvenile wood and the mean density of the trees were significant with R2 varying from 0.53 to 0.64. The study of the wood density of the trees in the provenance trial, 19 growing seasons after planting, showed the presence of a moderate negative correlation between radial growth rate and wood density. No significant difference was found among provenances with regard to the average density values of the juvenile wood. For the radial variation pattern of wood density and annual growth ring width, comparisons made it possible to identify significant differences between southwestern and northeastern European provenances. There is still, however, strong individual variability in these traits, with 65 to 85% of total variation being due to differences between trees from the same plot. A three-stage selection procedure would make it possible to maintain wood density, to reduce by half the deviation between the internal and external juvenile wood density, and to double the volume output, depending on the selection strategy chosen. These results confirm the potential for rapid growth and the excellent wood quality of Norway spruce provenances that are well adapted to the soil and climate conditions in Quebec. 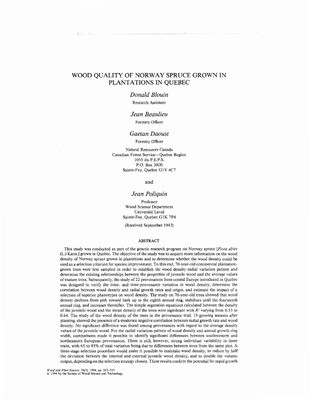