The quality of forest tree seedlings produced in nurseries is usually expressed in terms of height and diameter. However, several authors have emphasized the importance of using more dynamic variables that describe the physiological state of seedlings, so as to better characterize the material intended for reforestation. To rate the relative importance of the variables selected in characterizing seedlings, 10 morphological and physiological variables were measured on seedlings from different stocks of spruces. Twenty-three batches of seedlings intended for reforestation were obtained from 7 forest nurseries. These included 11 batches of 2+0 white spruce, 7 batches of 2+0 black spruce and 3 batches of 2+0 Norway spruce, all grown in 45-110 containers. Two additional batches of 1+0 black spruce planting stock raised in smaller containers (67-50) were also studied. Seedlings were dormant upon delivery. Containers were placed in a greenhouse under normal rearing conditions. Each batch of planting stock was sampled at 3-week intervals on four different occasions. A first sample was used to measure morpho-physiological variables: stem height, basal diameter, fresh and dry mass of shoots and roots, electrical resistance, water potential, and osmotic potential of the seedling. Root growth capacity of seedlings was assessed from a second sample. Principal component analysis (PCA) was conducted using the correlation matrix of the observed variables within each unit based on a combination of seedlings from one species of a given age, for the four observation periods. For the units of 2+0 white spruce and 2+0 black spruce having a sufficient number of batches, a PCA was performed using means per container. In these analyses, four components accounted respectively for 89% and 85% of total variation. Using 9 morpho-physiological variables, excluding root growth capacity and, relying on individual values for the PCA, 80% of total variation is at least accounted for by the first three components for the four combinations. The estimation of the variance explained by different subsets of the 10 variables indicated that a specific subset of 4 variables, considered simultaneously, explained on average 75% of total variation. This particular subset is composed of basal diameter, stem height, water potential and root growth capacity. 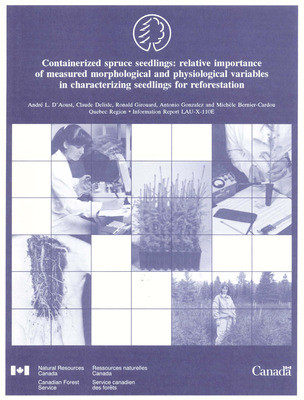