The results show that the residual series for a species and a plot are synchronous between growth classes. The series of spruce in the spruce-litter forest and the spruce-mosses forest showed amplified oscillations with a complete cycle of about 7 years, while periodicity of tamarack was different, with a cycle of about 15 years.

Response functions based on multiple regressions showed a strong positive influence of rainfall (June and August) and mean temperatures (December and October) on volume increment for the species studied from 1968 to 1987.

Comparison of the climatic model with the series observed from 1988 to 1992 reveals greater than expected variations; however, the response functions for the period from 1983 to 1992 showed that these variations reflect climatic variations, in particular the effect of precipitation (June rainfall) on black spruce in the spruce-mosses forest and heat stress (mean August temperatures) on black spruce in the spruce-litter forest, while the effect of drainage was negligible or nil.

Also available under the title:
Survey of the effects of forest drainage operations: (3) Climate and volume increment of black spruce and tamarack at Saint-Anaclet (English) 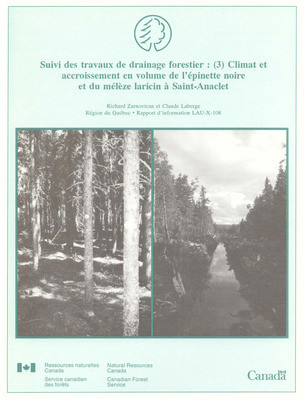