The effect of combined and selective thinnings, and of thinning from above, with a thinning intensity of 50%, 35% and 44% based on cut volume, was studied on the radial increment of the main maple-yellow birch forest species in the 56-year-old Saint-Zacharie forest, Richmond County, Quebec.

Thinnings were carried out in three experimental plots and the effect was studied for sugar maple, beech, yellow birch, white ash and basswood.

Beech reacted positively to both thinning from above and combined thinning, even though the latter reaction was not statistical1y significant. These results confirmed the species' tolerance to shade and great adaptability to type of treatment.

The reaction of yellow birch to individualization of crop trees was mixed, while analysis of variance made it possible to detect a significant increase following thinning from above and a significant decrease following selective thinning. This reaction was mainly due to the difficulty this species experiences in progressing in a fixed social hierarchy.

The study reveals that there was no reaction to selective thinning in basswood and white ash. This suggests that individualization of these species must take place sufficiently early to achieve the desired effect.

Also available under the title:
Reaction of principal hardwood species to light felling in a maple-yellow birch forest in the Eastern Townships (English) 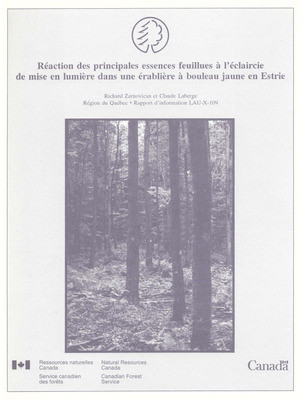