Genetic diversity was studied in 22 populations of the white pine blister rust fungus Cronartium ribicola from natural stands and plantations of eastern white pine, Pinus strobus. Pseudo-allelic frequencies were estimated at each of 7 putative RAPD loci by scoring for presence or absence of amplified fragments in dikaryotic aecidiospores. Analysis of genetic distance between all pairs of populations did not reveal any trend with regard to geographic origin or type of white pine stand. In addition, when hierarchical population structure was analysed, total genetic diversity (Hs = 0.214) was mostly attributable to diversity within populations (Hs = 0.199; AMOVA φst = 0.121, P<0.01). Genetic diversity of populations relative to region of origin (east, centre, and west) or type of stand (natural stands vs plantations) was not significantly different from zero (P>0.10) Nevertheless, a significant proportion of genetic differentiation was found between populations within region or stand type (Fst =0.114; φsc = 0.132, P<0.001). This result indicates that some population structure exists but that it appears to be independent of region of origin or type of stand. At least for 2 populations from white pine plantations, it appears possible that a recent introduction of a limited number of propagules was responsible for low levels of genetic diversity. We interpret these results as meaning that either long-distance dispersal is taking place between populations more than 1000 km apart or that these populations share a common recent ancestor. In addition, we suggest that C. ribicola may still be expanding its distribution by colonizing new plantations. 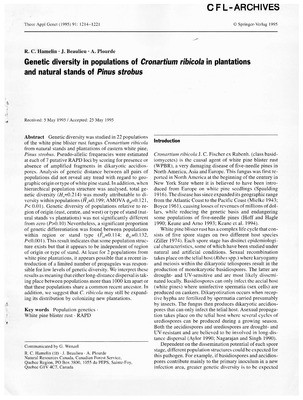