Acidification of reconstituted soil columns from the LF, H, Ae, Bhfl, and Bhf2 horizons of a Ferro-Humic Podzol sampled at the Lake Laflamme Watershed (Montmorency Forest), enabled us to examine buffering processes occurring in organic and mineraI horizons treated with H+ and SO42- at different concentrations. Endogenous acidification related to nitrification considerably narrowed the differences between the treatment effects.

Treatment-related loss of exchangeable bases were confined to the LF horizon (and H horizon for exchangeable Mg). The same pattern of differences between the treatments was noted for the percolates.

More than 80 percent of the H+ in the input was consumed by the processes of ammonification and ionic exchange with exchangeable Ca. Relative to the initial exchangeable content, leaching loss, and exchangeable fraction loss in the reference treatment (deionized water, pH 5.6) increased in the following order: K> Mg > Ca, the inverse of the respective initial concentrations on the exchange sites. The order was reversed when the effects of this treatment were compared with the effect of the most acidified treatment (pH 2.9). Because the leaching of K+ was particularly enhanced by a substantial column of water and by the absence of root uptake, it was not possible to determine the specific effect of acidification on this element.

The dissolution of aluminium-containing mineraIs was by far the most significant buffering process in the spodic horizons. In ail of the treatments, the process was greatly accelerated by nitrification and maintained by desorption of SO42- and/or dissolution of hydroxyaluminosulfates for pH 2.9 and pH 3.3 treatments. 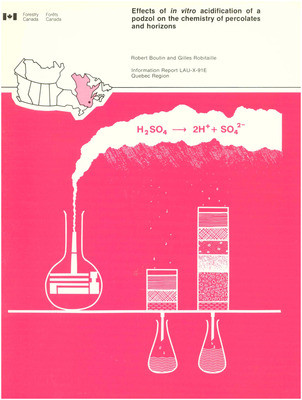