Sharing common microenvironments among neighbour trees and plots introduces positively correlated errors, which violates the assumption of independence among errors in analysis of variance, introduces bias in predicting random effects and overestimates individual narrow-sense heritabilities. The objectives of this study were: 1) to estimate the extent of spatial autocorrelation in two eastern white pine provenance/progeny tests, 2) to examine the efficiency of analysis of covariance in increasing the precision of family and seed source comparisons, 3) to assess the efficiency of two spatial models for improving precision in estimating family and seed source means, and 4) to test a new spatial method for estimating individual narrow-sense heritability. Heights of 7- to 11-year-old trees from 285 families belonging to 71 provenances were measured in two eastern white pine provenance/progeny tests planted in two rows per clearcut strip between hardwood bands in Quebec. Spatial autocorrelation was moderate (range 0.15 to 0.19) at one site and weak (range 0.09-0.12) at the other site. Relative light intensity and drainage classes were tried as covariates in analysis of covariance, but they reduced the error mean squares by less than 1%. At the site with moderate spatial autocorrelation, the two spatial models improved precision in estimating family means, but spatially adjusted and unadjusted family means were very strongly correlated, suggesting no changes in family ranks. At the other site, which had weak spatial autocorrelation, the spatial models did not increase the precision of family comparisons. A new procedure for estimating the additive genetic variance based on the combined effect of genetics and spatial positions of trees was proposed and tested for the two sites. The new method gave reasonable estimates of individual narrow-sense heritabilities, but the statistical properties of the estimators must be examined. 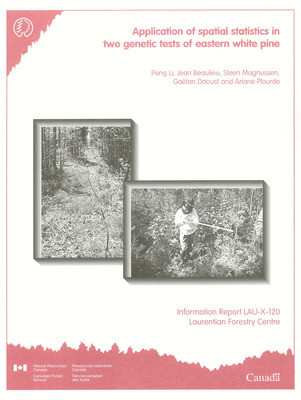