Known patterns of genetic variation among provenances are useful in gene resource management such as guiding seed transfer and delineating breeding zones. The objectives of this study were (1) to determine the genetic structure of white spruce (Picea glauca (Moench) Voss) from Quebec and southeastern Ontario, (2) to develop models describing patterns of genetic variation among provenances and their relationships with environmental variation, (3) to test the validity of the models by using independent data sets, and (4) to guide seed transfer and to delineate provisional breeding zones for white spruce in Quebec. A sample of 63 provenances was used in this study, with each provenance composed of one to five separate families (a total of 263 families). Data were collected on seedling heights at various ages, 1-year branch number, and 3-year bud burst and bud set. Significant differences were found for each trait among provenances and among families within provenances. Provenances and families within provenances accounted for similar amounts of the genetic variability. All traits were moderately to strongly intercorrelated at the provenance level. Two principal components composed 87% of the total variation for all traits. Regression models explained between 19% and 65% (an average of 47%) of provenance variation and showed that patterns of provenance variation followed mainly a south-north cline and to a lesser extent a west-east cline. The regression models were tested using data from seven field tests, which showed that the models performed fairly well in predicting relative risk of seed transfer. White spruce provenances could be transferred long distances with small relative risk. We delineated two provisional breeding zones for white spruce in Quebec from the models describing patterns of genetic variation among provenances. 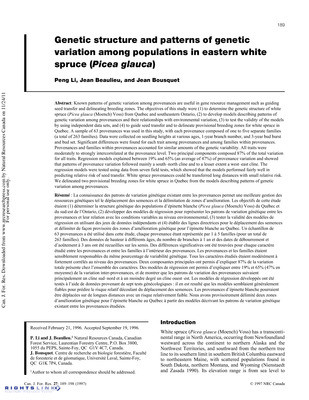