After the introduction of white pine blister rust (Cronartium ribicola) into North America at the beginning of the century, reforestation with white pine (Pinus strobus) became hazardous; the disease caused a high rate of mortality and it was a limiting factor for reforestation. In 1933, a plantation with 300 000 white pines in Valcartier near Quebec City was a complete failure; 60% of the seedlings were killed by the pathogen in less than 200 years. The main control measure applied in the United States during the first half of the century was the eradication of the alternate host, Ribes spp. When applied by forest owners in eastern Canada, eradication did not control the disease. Later, pruning was considered as an alternative to eradication. Recent epidemiological studies indicate that the age of the plantation is the critical factor when deciding when it is time to prune. Under conditions prevailing in the Appalachian Mountains in eastern Canada, pruning trials in 11 plantations ranging from 8 to 12 years old indicate very good control of the disease, as very few new infections were observed three years after pruning. In the 14 unpruned plantations, the rate of infection varied from 3% to 35% after three years of observation. It is interesting to note that the diseased trees are located near the Ribes indicating that the short distance infection is very important in the epidemiology of the disease. On these old farm lands, it is recommended to prune white pine 7 to 12 years after planting and to eradicate the Ribes that are usually located on old piles of stones. 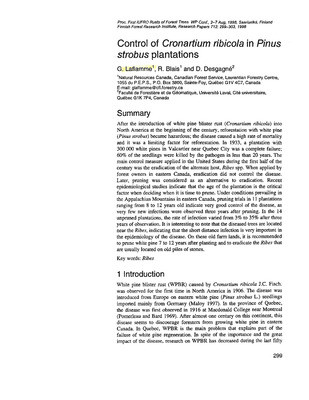