We are studying the biodiversity of the endophytic fungal flora from eastern white pine (Pinus strobus) across its Canadian range. 3200 needles from 6 Canadian ecoregions were plated on growth media to determine qualitatively and quantitatively the biodiversity of its endophytic flora. Preliminary results indicate that more than 80 species of fungal endophytes are to be isolated from eastern white pine. Another large collection of previously isolated endophytic fungi from white pine needles and apple tree (Malus domestica) leaves were tested for their potential to inhibit Cronartium ribicola the causal agent of white blister rust. Coniothyrium spp. isolates from apple leaves was very effective in controlling C. ribicola on Ribes leaves, the alternate host of the disease. Coniothyrium caused a dramatic reduction in the number of teliospores, infecting and killing the fungus at the uridial stage. From the 99 white pine needle endophytes tested, three have shown potential to inhibit the infection of C. ribicola basidiospores on white pine needles. Preliminary results of these tests will be presented and discussed. 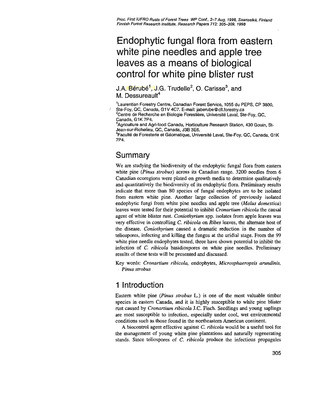