The genetic structure of populations of Cronartium ribicola was studied by sampling nine populations from five provinces in eastern Canada and generating DNA profiles using nine random amplified polymorphic DNA markers. Most of the total gene diversity (Ht = 0.386) was present within populations (Hw = 0.370), resulting in a low level of genetic differentiation among populations in northeastern North America (Fst = 0.062). A hierarchical analysis of genetic structure using an analysis of molecular variance (AMOVA) revealed no statistically significant genetic differentiation among provinces or among regions. Yet, genetic differentiation among populations within regions or provinces was small (AMOVA ФST = 0.078) but statistically significant (P < 0.001) and was several orders of magnitude larger than differentiation among provinces. This is consistent with a scenario of subpopulations within a metapopulation, in which random drift following migration and new colonization are major evolutionary forces. A phenetic analysis using genetic distances revealed no apparent correlation between genetic distance and the province of origin of the populations. The hypothesis of isolation-by-distance in the eastern populations of C. ribicola was rejected by computing Mantel correlation coefficients between genetic and geographic distance matrices (P > 0.05). These results show that eastern Canadian provinces are part of the same white pine blister rust epidemiological unit. Nursery distribution systems are controlled provincially, with virtually no seedling movement among provinces; therefore, infected nursery material may not play an important role in the dissemination of this disease. Long-distance spore dispersal across provincial boundaries appears to be an epidemiologically important factor for this pathogen. 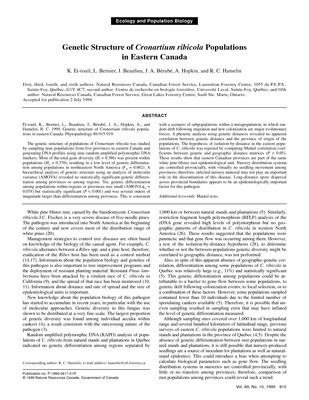