The black army cutworm, Actebia fennica (Tauscher), has long been a sporadic pest of herbaceous agricultural crops in the northern hemisphere. Recently, it has become a pest of planted conifer seedlings in central British Columbia. Moths fly late in summer and oviposit in the soil, frequently on burned areas. Eggs hatch late in the fall and the young larvae overwinter in the soil. Feeding on sprouting vegetation begins shortly after the snows recede in spring. Most spring feeding in central B.C. in 1973-74-75 began after sunrise: night hours were frequently too cool for larval activity. Feeding was completed in the valley bottoms about the second week in June; it continued for a week or two longer at higher altitudes.

There is some suggestion that a series of warm, dry years precedes a black army cutworm epidemic and that warm dry conditions during egg laying and hatching are necessary for development of infestations. Heaviest concentrations of cutworm larvae have appeared on clearings burned over the previous year or two.

Herbaceous foliage is preferred when present; however, when cutworm larvae are abundant and such foliage is sparse, they accept and may completely defoliate conifer seedlings. The effect of defoliation of seedlings and bud and twig tip damage varies considerably with soil moisture and degree of establishment of the seedlings. In 1974, extensive seedling mortality, attributable to cutworm feeding, occurred on the "Sue fire" plantation.

The economic impact has been sporadic in agriculture. Usually only individual fields of forage crops have been severely denuded, and until recently there has been little impact on forestry in B.C. However, in 1973, 1974 and 1975, damage was significant in a number of conifer seedling plantations, notably in the Golden area in 1974, when the stand value loss in the "Sue fire" plantings was calculated at over $114,000. The abundance of cutworms and duration of the infestation on this area was attributed to an extensive prescribed burn a year after a wild fire.

About 14 species of parasites have been reared from black army cutworm larvae and/or pupae in North America; three particularly important ichneumonids, Erigorgus sp., Eutanyacra suturalis (Say) and Pterocormus creperus (Cress.), have been reared from the pupal stage of the cutworm in B.C.

Control trials were conducted in 1974 near Golden, B.C.; Diazinon, Dylox, Bacillus thuringiensis, Cordyceps militaris and a nuclear polyhedral virus were applied with a portable mist blower. Diazinon at 3.4 kg/ha (3 lb/A) and Dylox at 2.2 kg/ha (2 lb/A) gave the most promise. 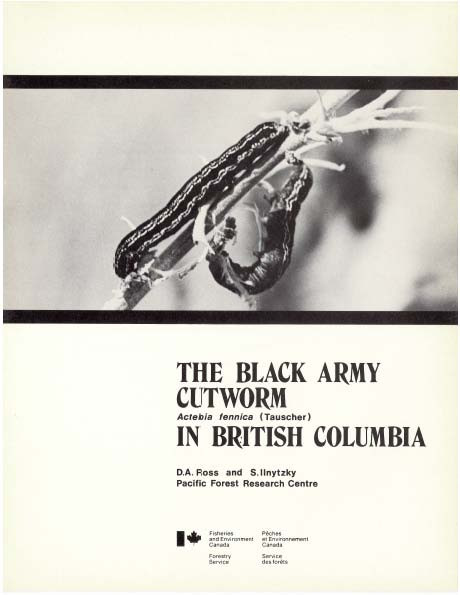