A symposium on R&D work on the genetics of white spruce (Picea glauca [Moench] Voss) in Quebec was heId on March 23, 1993 at the Laurentian Forestry Centre (LFC), in Sainte-Foy, Quebec. At the symposium, aIl aspects of current research in Quebec on genetic improvement of white spruce were presented and discussed. For example, results of research on genetics, flower induction, pollination, seed supply as weIl as micro-cutting and in vitro propagation were outlined. Participants were also informed about new research projects on seed transfer over the range of the species in Quebec, use of RAPD markers and genetic transformation. Updates were given on current and past research. Discussions dealt mainly with breeding strategies, integrating biotechnology into breeding programs, future prospects for this technology and the nature of products to be developed. Some sixty representatives from Quebec universities, the ministère des Forêts du Québec and the Canadian Forest Service of Natural Resources Canada attended the symposium. A summary of each presentation and the moderator's report are presented in these proceedings. The program and list of participants are included in the appendices. 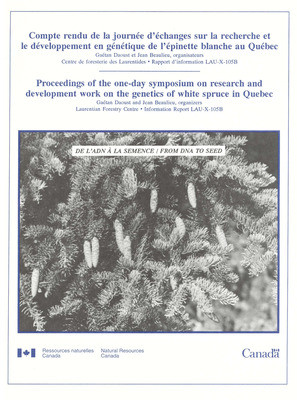